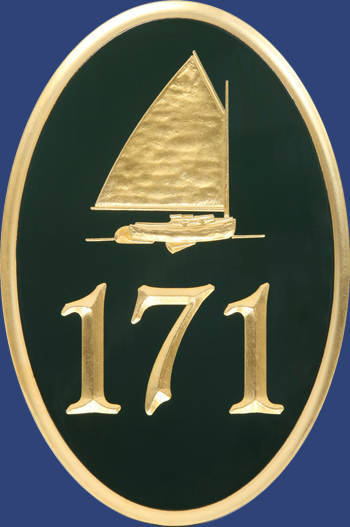 The old stone building in the center of downtown Chatham has been the scene of sign making for as long as most people can remember, but there are a few old timers who can remember the tack shop that was the original use for the antique building.

Visitors to Cape Cod can make the short detour to the Cape's elbow where Nantucket sound and the Atlantic Ocean come together, where 6,000 residents live in the fishing village of Chatham, Massachusetts. This is the place where traditional "Quarterboards" were first crafted . Made to hang on the ships quarter, or, perhaps the ship's deck house, Quarterboards were used for identification, but soon became prized objects when ships met their fate on the treacherous shoals South of Chatham. Original quarterboards were large, befitting the scale of the ship, so the typical place to display them was on a wall of the house or barn. As time went by, they became proud reminders of the era of sailing ships. The art of graceful curves and deeply incised letter styles has been handed down to today's crafts people who labor to hand make authentic replicas of the original boards. Now the growing practice of naming your new residence, brings old and new together, and adds a certain touch to your new home.

The shells and pineapples used for embellishment of the signs, also have a history of their own. While the scallop shell celebrates our connection to the sea, tradition has it that the pineapple's symbol of welcome started in whaling days when ships returned from the South Seas. The Captain and mates, anxious to see their friends, would place a pineapple on their picket fence to indicate that they were back and all were welcome.